Similac produced a new video about the perils of the mommy wars and how ultimately we should come together and stop our battles. I posted the video on my mama.is.comic page because, ironically, the day the ad filmed I was in the park sitting on a picnic blanket. There also happened to be another mother/author who has written a book about attachment parenting standing there too. The irony put this ad on my radar, What are the odds?

When I was first starting out, pregnant, eighteen years ago, I learned everything I needed to know through the unsolicited advice of strangers. I bought books on pregnancy and birth and they sucked, they told me how to go along. It was a mother that worked with me that mentioned hiring a midwife, I had never heard of such a thing except historically. It was a group of mothers who told me that they had a home births. It was a group of mothers who told me that my idea, ‘breastfeeding for three months’ was a great place to start, but maybe I should reserve the right to continue. And finally it was at a La Leche League meeting that I found solutions for the millions of things that didn’t seem to be working about breastfeeding.

The Mommy Wars didn’t exist. And whether the first battle line was drawn by a judgmental mother, or a mother who erroneously perceived herself judged. The corporations that peddle baby stuff profit handsomely by fanning the flames. They make it all but impossible to go back to helping each other with their fake breastfeeding education and ‘sanctimonious forgiving’ if you have difficulty breastfeeding.

Mother-to-mother support is all but gone—unless a mother asks, and you can tell she really wants to know, and you phrase your answer perfectly well, and apologize profusely for any missteps—but why would she ask, when she believes a judgment is coming?

It’s still not Mother to Mother support in all of its glory. We shouldn’t agree to disagree as if all things are equal. All actions aren’t equal. And everyone of us still has things to learn.

We mothers are amazing wondrous caring people. We give birth and feed our young and most of the time we learn as we go. It’s a difficult process but Mother to Mother support can be transformative.

So please don’t buy into the idea that the Mommy Wars exist, don’t judge or feel judged and voila! they’re all gone. And the inverse, please don’t agree to disagree, or not help, or  pass along your wisdom. It’s not the way we grow and learn. Instead, ask for help, seek out advice, offer support and maybe just maybe we can get our power back. 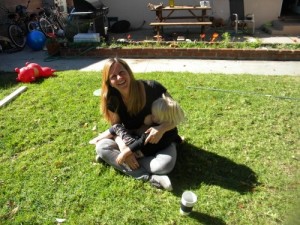 Heather Cushman-Dowdee was the long-time creator of the comics: Hathor the Cowgoddess and Mama Is...  Within a space of ten years she produced hundreds of comics, a daily blog, and wrote a few books, too. Her comics have been featured in Mothering Magazine, The Mother, Holistic Parenting, and Birthings, and in 2014, a comic was posted on UpWorthy.com and was later named one of that website's top five of the year.
These days Heather is writing novels under the name, H.D. Knightley.  Her first YA book is called, Bright,  and brings many of the same ideas into novel form, including a character that breastfeeds and wears her baby in a sling. It's the story of a girl, a bright city, the hidden stars, and what can happen when you tear it all down. Her second book, Fly, is a twisted retelling of the fairytale, The Light Princess, about a princess who has no gravity, a kingdom without water, and the surfer boy asks the Princess Amelia to matter. Both are available on Amazon in paperback or e-book form.

New Report: SEEDY BUSINESS: WHAT BIG FOOD IS HIDING WITH ITS SLICK PR CAMPAIGN ON GMOS