The Woman On the Cover Is Both Madonna and Whore 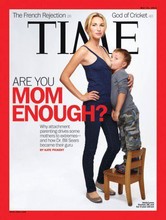 I’ve been radio silent for a while, mostly because I see and hear so many things that need addressing that I tend to get overwhelmed and not sure where to begin.

But last week Time magazine came out with a cover story that has had the blogosphere, the internet, the radio, and television news a buzz. And I can’t let this one go unaddressed because I think this is more of a womens’ issue than a mothering issue or a breastfeeding issue.

The environment for birthing women and mothers as a whole isn’t good. I’m not saying there aren’t great care providers and great experiences to be had, nor am I saying that mothers don’t get to make any choices or get the support they need. All that is out there and can happen, but as a whole, there are more tragic stories than positive, more women feeling lost, overwhelmed and criticized than supported and encouraged.

The cover photo has a young, attractive mom breastfeeding her 3 year old in a somewhat provocative stance. The title of the story is “Are You Mom Enough?”.

People are debating: Is this photo what extended breastfeeding is about? Why didn’t they depict her in a more nurturing position? Is it too much skin to show on the cover of the magazine (mind you it’s hardly any skin at all compared to what we see on the covers of most magazines)? Is the story accurately representing Attachment Parenting (it is not)? Is extended breastfeeding appropriate? And it goes on and on.

My concern is not how provocative the photo is; whether this is what the mom signed up for or was she duped; whether Attachment Parenting is best for babies and children; whether extended breastfeeding is best, etc. My concern is how women and mothers are depicted here and the general hysteria that has ensued. The depiction of women in the article ain’t nice and it ain’t respectful and it ain’t reverent (which one might hope for when the magazine came out just before Mother’s Day). And the reaction to the cover photo has been brutal.

I believe, the reaction to the cover photo is not about breastfeeding or mothering but about the terror that the image represented threatens the separation of Madonna and Whore. This mother on the cover, is blatantly both, simultaneously. And why shouldn’t she be? I believe people think she shouldn’t be because it is a huge threat. And what better way to start an article about a style of mothering than to select a cover photo that will have people up in arms from the get-go and ready to criticize?

The article describes wearing babies in slings or carriers “in which infants are literally attached to their mothers…” implying that the “attachment” of Attachment Parenting is about a physical fusion of mother and baby based on mother’s excessive need, rather than the actual meaning of the word “attachment” being about healthy emotional attachment of the child in the formative years.

Quickly the article turns into a profile of Bill Sears, the pediatrician at the core of popularizing principles of Attachment Parenting. While the profile of him isn’t glowing and it misses a lot of what he and his work are about, he comes out seeming generally sane, caring and well-intentioned. Something the mothers represented in the article do not!

Mothering is the most intense and demanding job a woman can ever take on. She puts her heart, mind and body through the ringer. And what do I see happening? I see women being mocked at every turn. I see their voices being undermined. I see other women and mothers turning against them.

The mothers emerge from this article seeming like the crazy ones while the male doctor who represents this movement comes out seeming sane. Something’s wrong with this picture.

We as a society have been trained and continue to be trained to undermine women. Women undermine their own voices and the voices of other women. Women calling other women and mothers crazy, and stupid, and martyrs.

My clients are always telling me that other mothers will ask them what kind of birth they are planning. If they say a natural birth, they are met with the response “oh don’t be a martyr” or “that’s crazy” or “yeah, good luck with that” (in a mocking tone) or “you’ll never be able to do it” or “it’s so awful”. And it goes on….and on….and on. Women who tell their doctors they are hoping for a natural birth and usually get the response “well, we’ll see”.

What the hell is going on? A woman just expressed a hope, a desire, a dream for what she wants as she brings her child into the world and this is what people say to her?

When’s the last time someone said they are training for a marathon and the response was “oh don’t be a martyr” or “well, we’ll see if you actually finish”? Usually people respond to that by saying “wow, that’s impressive!” or “good luck” or “woah, how are you preparing for it?”.

What if that’s what people said to mothers when they said then want a natural birth? What if other mothers said, “wow, I really hope you get that” or “good luck. I hope it’s wonderful for you.” And what if doctors responded by saying “it’s an extremely challenging task that can totally be done and if that’s what you want, I recommend you educate and prepare yourself and get support”?

What if an article was written about mother’s employing Attachment Parenting principles and it talked about how fulfilled the mothers were. About how they employ these principles because it’s what feels right in their gut. What if the article talked about how empowered women feel by it and how they’ve found community among other mothers who parent like this?

Or the challenges of finding the support they want. What if the title of that article were something like “How Mothers Have Come to Feel Powerful – and the doctor who guided them to there”? As opposed to the actual title “Are You Mom Enough – Why attachment parenting drives some mothers to extremes – and how Dr. Bill Sears became their guru” which disenfranchises mothers and pits them against one another.

I’m tired of the debates about what breastfeeding is about and should be about and when it’s appropriate. I’m tired of the arguments about what is a safe way or the right way to give birth. It’s time that we start supporting and encouraging women in their choices and their lives. It’s time that we start saying that what feels right to a woman and mother is right, for her and her family.

Behind the Cover article, interviews with the mom posing and photos of the shoot of other nursing mothers:

Reactions to TIME Cover and Story

API Responds:  Why the TIME Magazine cover/article shows that Attachment Parenting is Going Mainstream and Not Extreme

“Breastfeeding is not a macho test of motherhood, with the winner being the one who nurses the longest. In fact there ARE no macho tests of motherhood. Motherhood is — should be — a village, where we explore each other’s choices, learn from them, respect them, and then go off and make our own.”

Anthropologists say US moms are odd for NOT breastfeeding their three year-olds like the rest of the world does (and always has). “Despite the brouhaha over breast-feeding kicked off by a Time magazine cover photo this week of a mom nursing her 3-year-old son, that’s actually the norm worldwide, experts say. But breast-feeding children that old is practiced among a tiny sliver of mothers in the United States.”

Jessica’s work as a birth doula, perinatal consultant and massage and somatic therapist draws on her work and study experiences in various cultures around the world, her work with pioneers in various fields, and her own healing journey. A graduate of Vassar College, Jessica’s interest in obstetrics and gynecology led her to a position shadowing an obstetrician in a New York hospital. The experience was both surprising and revealing.

She was struck by the lack of information offered to patients and the absence of significant communication between doctors and patients. There appeared to be little to no recognition of the innate capacity of a woman’s body to give birth, the anxieties and fears that arose in women and their families around childbirth, or the nurturance required during this momentous time in a mother’s and couple’s life. The emotional and subjective physical experience of the mother during childbirth appeared to be of no consideration.
As a result of this experience, Jessica redirected her studies to begin her exploration of women’s health care, women’s bodies and health education. She spent time living in rural Kenya where she taught sex education, researched female circumcision and volunteered in the village hospital and health clinic. She furthered her appreciation of alternative healing systems in India, where she studied Ayurvedic medicine and yoga.

In the year 2000 Jessica trained with both DONA (Doulas of North America) and ALACE (Association of Labor Assistants and Childbirth Educators) to become a birth doula in her native New York, and knew she’d found her work.
Jessica became a council member of the Metropolitan Doula Group, a continuing education group for birth support professionals in the New York Metropolitan area. She deepened her expertise on birth, health and healing through her studies with pioneers in the birth field like Penny Simkin, Pam England, and Ina May Gaskin.

Jessica continues to grow her expertise by assisting homebirth midwives. This allows her to further learn about medical language, standard care protocols, physiological processes, and the various approaches to providing care to mother and baby at birth.
Jessica also brings to her work extensive training in bodywork, healing, and somatic awareness. She is a licensed massage therapist and is nationally certified in therapeutic bodywork and hydrotherapy. She is a Continuum Movement™ practitioner and currently works extensively with Emilie Conrad, founder of Continuum Movement™, a revolutionary exploration of physical states and experience, healing and the relationship of the body to its environment. Jessica is a certified therapeutic aromatherapist through The Aromahead Institute of Sarasota, Florida and has been studying with herbalist and homeopath Peeka Trenkle since 2002. Jessica also spent several years studying with a Japanese Zen master in the San Gabriel mountains in a traditional Rinzai Zen monastery.

What Babies Know About Living In Our Bodies