Feminism Is Men’s Business Too

I’ve been thinking a long time about our sister Miley Cyrus, since she first wagged her tongue at me across my living room floor. That fateful VMA performance unleashed a maelstrom of various commentary ranging from ‘leave the poor girl alone’ to finger wagging feminist disapproval, even rage. Why all that anger? Internally I watched my own opinions swing like a trapeze artist, curious to witness my mind’s fixation, as I have absolutely no interest in pop-artists and their antics per se. But I do have interest in how art affects public discourse, and what is says about us as a culture.

Finally it hit me, why my mind kept badgering the point, and why there was so much public anger around the topic. The context of the Miley Cyrus conversation — ‘she’s evil’, ‘she’s cool’, ‘she has a right to do what she does’ is completely off the mark. The conversation centers around her body and her sexuality and the push-pull arguments around a woman’s worth—completely assuming the words worth/body/sexuality belong in the same sentence. They don’t. And that points to where we as women remain imprisoned in cultural viewpoint and evaluation that is just plain wrong, and needs to stop. Frankly while men’s sexuality and body are seldom up for public discourse, women’s bodies and sexuality are public fare game. They are the public’s right. They are the public’s possession.

When the swing in my mind finally settled I realized that, for me, the Miley Cyrus display meant nothing about women’s rights, women’s free expression, sexuality, her body, fading childhood innocence, emerging womanhood, or the loss of American wholesome-ism. It meant hardly anything of any significance or meaning at all. I just found it ugly. It just didn’t appeal to my taste, and that was all it was.

There are plenty of female artists who move their bodies in ways that I find more pleasing. Beyoncé slayed 108 million Americans at last year’s Super Bowl. So strong and powerful was her show, that it seemed to many of us that the football game was a sideline act to support her—and not the other way around. Her moves were every bit as raunchy and provocative as Miley’s. They were just prettier.

Astonishingly what the Miley conversation reveals is that we still remain inside a tiny world defined by our sexuality and our right to be sexual or not, when to be sexual, how to be sexual, as ifthat were the important discussion. When instead, it should not be up for public discussion. What we do with our bodies is no-one’s business! We should stop the conversation. But we don’t. We pander to it, and live within it and call it freedom of speech. And worse, we prime our little girls to be ready for that same gladiator ring.

We walk them through the hot-pink aisles of the girl clothing section of our local department store and frock them in short miniskirts and lacey bras. We mock their developing breasts by parading skeletons down the Vogue runway, and then teach them the language of plastic surgery and breast implants. We teach them to flirt, manipulate and reward them for beauty. We teach them to be Beyoncé; we are horrified when they are Miley. And when Miley shows up, we want to wash our hands of her. But the two are the same.

Miley did not invent twerking, we did. Miley just followed the cultural modeling that we as women (and men) have perpetuated. And that is why we are angry when we talk about her. We don’t like what we’ve created and we don’t want to look at it because it means we must take responsibility for it.

Beautiful women and beautiful moves aside (please), Beyoncé the icon, while bold and inspiring, still only gives women a tragically limited palette from which to define true powerful intelligent womanhood. If she is lifted up by our culture as one of the finest our gender has to offer, then we are in big trouble. Big trouble.

What this means it is it’s still a man’s world, governed by men’s values, men’s media, and we are still living inside it. Our emancipation, our rights, our expression, our worth is still being forged within the walls of that world—and call it feminism. We should, instead, define the feminine through a completely different paradigm. We need to step out of those walls completely and define a whole new set of rules for ourselves. We don’t just need ‘equal pay’, we need ‘different pay’. It’s like we as women are running up the aisles of an airplane, thinking we are adding more momentum to the flight, when we are on the wrong plane in the first place. 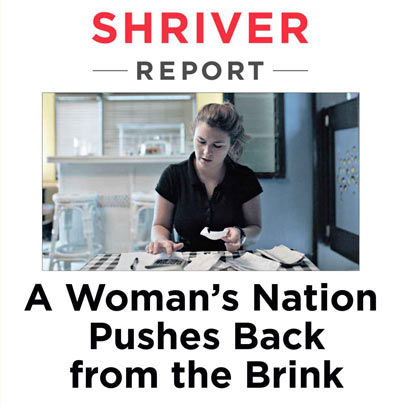 No where are the consequences of our tight framing more evident than in the economic sphere. According to the most recently released The Shriver Report: A Woman’s Nation Pushes Back from the Brink, 1 in 3 Americans today live in poverty or hang on the brink. 70 million are women and the children who depend on them. Worldwide, women make up half the world’s population, yet represent 70% of the world’s poor. There is a disturbing global trend of increasing, not decreasing, gaps in income between the sexes. This is being called the feminization of poverty.

Media is of course where the confines of this masculine worldview is most celebrated. Row upon row of women’s magazines display the limited discourse that remains tightly corseted between weight, fashion and housekeeping. Television and movies keep the trance alive, save for the rare heroine who (literally) punches through the veil. But even she is sexy and beautiful…and, oh yeah, violent.

It’s not that a man’s world is inherently bad. It’s just that it is only half the equation. Therefore the lack of a real feminine culture—that stands outside of, and alongside of the masculine—is problematic for both sides. Oppressing the feminine not only results in unspeakable horror, violence and tragedy for women and young girls around the world, but suppressed feminine power can come out sideways, twisted into passive aggressive subversions that damage both genders. At its best, the world flounders along with only half a wing.

Therefore, this is not a women’s issue. It is not a gender issue. It is a civilizational issue, an ethical issue, and one that costs everyone. It cannot be solved exclusively within the context of women supporting women. We are beyond the realm of Annie Lennox’s sistas doin’ it for themselves. If an entire system is broken, then we need our brothers along side us to make things different and help tear down the masculine walls that define and strangle us all.

How is man to recognize his full self, his full power through the eye’s of an incomplete woman? The woman who has been stripped of Goddess recognition and diminished to a big ass and full breast for physical comfort only.
The woman who has been silenced so she may forget her spiritual essence because her words stir too much thought outside of the pleasure space.
I am sure the men, who restructured our societies from cultures that honored woman, had no idea of the outcome. They had no idea that eventually, even men would render themselves empty and longing for meaning, depth and connection.
When woman is lost, so is man.

Like a fish in water, it is hard for us to see what we live inside. It is too close, too familiar and feels too natural. So we have to begin by educating one another. In my work, I find that men are very surprised and open when I point out certain ways that feminine oppression, sexism and double standards are apparent. They literally do not see it, and are grateful to know about it. Sometimes we can point that oppression out in a third person exchange with another man; sometimes we can point it out when it is another woman doing the dirty work on her sister (this usually surprises my male cohorts the most). Sometimes we can point out when the feminine inside—men or women—is being silenced. We can point it out during movies, books, or lectures. The important thing is to start seeing it, naming it and calling it out to others.

We can, both genders, befriend each other and help teach one another to see that toxic water we swim in. We can do it right now, in our workplace, in our schools, in our families. And then we can start to make real changes that are not about putting the masculine down, or fitting the feminine inside him, but lifting the feminine up to her rightful sovereign place next to him. Free, emancipated, powerful in her own way.

This will be a world filled with possibility we’ve only barely begun to imagine.

Brainstorm: The Power and Purpose of the Teenage Brain by Dan Siegel

A Parent’s Right To Pleasure: Emotional Wellness For Moms And Dads