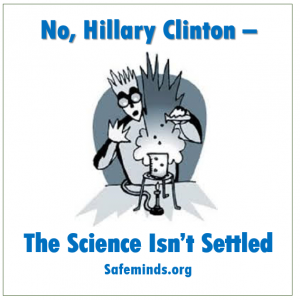 “The science is clear.”

“The science is settled.”

“There is no debate about the science of vaccines.”

These are just some of the claims about “science” lighting up the Twitter-sphere. Former Secretary of State Hillary Clinton’s February 2nd tweet has been spreading like a wildfire in southern California:

The science is clear. The earth is round, the sky is blue, and #vaccineswork. Let’s protect all our kids. #GrandmothersKnowBest.

It’s a good sound bite. The media this week has been loving it.

Science is a process of inquiry that constantly questions itself, refines itself, and reaches new understanding. Science is never fixed and unilateral. Something unquestionable and that cannot be challenged is called dogma, not “science.”

It may allay the fears of new parents doing their best to make the best medical choices for their children to pretend there is only one side to the vaccine question.

It may make Hillary Clinton, now a grandmother, feel better to assert that “the science is clear.” 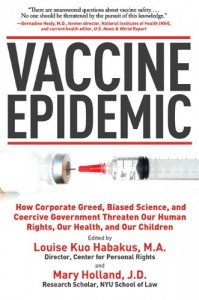 But the “science” (as if that were just one thing) is not clear. Not only is the “science” contradictory, it is also full of holes.

Here’s what the mainstream media is not telling you:

1) The United States vaccination schedule has never been tested scientifically.

Vaccines are approved on a vaccine-by-vaccine basis.

When a vaccine is tested for reactivity or side effects in pre-clinical trials, it is tested by itself.

The problem here is obvious: If a vaccine interacts with any other vaccines already approved and on the schedule in a way that causes damage, or if there are harmful cumulative effects of certain additives (like aluminum, a known neurotoxin, which is present in most vaccines) on a small child’s developing immune system, the “science” will not reveal evidence of harm because the “science” has not been done.

2) There has never been a scientific study done with a statistically significant control group of entirely unvaccinated children.

In order for a scientific study to be valid, it must have a control group.

Government health officials have long claimed that this kind of study would be unethical.

But there are now hundreds of thousands of completely unvaccinated children in the United States. What is truly unethical is the scientific community’s dogged opposition to designing and implementing scientifically valid studies about vaccine safety.

Without a control group, any scientific study provides limited value at best.

The “science” was also clear that diethylstilbestrol (DES), a synthetic hormone made from pregnant mare’s urine, was so safe and effective that it could even be used to make healthy pregnancies healthier.

DES, scientists later realized, caused devastating health outcomes in some children whose mothers were given the drug while they were pregnant.

The belief that vaccines are safe is so inherent in most researchers studying vaccines that much of the conclusions of the science done are undermined by confirmation bias.

4) The CDC science is not impartial.

When you have an agency responsible for the promotion and uptake of vaccines that also holds patents on vaccines and is further responsible for monitoring their safety, you create an inherent conflict of interests. The CDC is not doing independent research. They are doing research to prove a foregone conclusion–that vaccines are safe–and they are systematically ignoring the raw data and the scientific research that does not fit that agenda (see #5).

5) The CDC has altered and manipulated the data on vaccine safety and a host of neurological disorders including autism.

In 2000 SafeMinds obtained thousands of Freedom of Information Act (FOIA) files from the CDC that documented statistically significant associations between the mercury preservative thimerosal and a host of adverse neurological outcomes, including ADD/ADHD, speech and language delays, tics, neurodevelopmental delays in general, and autism. We discovered four generations of the data until the associations became insignificant. Read our detailed report.

The latest spectacular example of how the CDC alters and manipulates data has been documented by a senior research scientist from inside the CDC itself,William Thompson.

In a public announcement Dr. Thompson stated, “I regret that my coauthors and I omitted statistically significant information in our 2004 article published in the journal Pediatrics. The omitted data suggested that African American males who received the MMR vaccine before age 36 months were at increased risk for autism.”

According to a 2008 article in Pediatrics, Dr. Louis Cooper, vaccine inventor and former President of the American Academy of Pediatrics, reported that the total budget for purchase, promotion and delivery of vaccines in the U.S. was $4 billion. Only .5% of that budget was spent on vaccine safety research.

In other words, very little money is given to study vaccine safety. This makes logical sense if you are a government official who believes in a dogma and is not interested in real science. That person’s thinking would go something like this: since we know that vaccines are safe, we do not need to fund studies to prove that fact. But even the most pro-vaccine enthusiasts are beginning to realize that the lack of funding for vaccine safety studies may be harmful for our children.

And, of course, because vaccine manufacturers have no liability whatsoever for their products, there is little to no incentive for them to spend money to make their products safer.

We know for a fact that some children are harmed from vaccines. Isn’t it science’s responsibility to identify those infants who are more vulnerable to vaccine injury to prevent harming them in the first place?

7) Scientists and researchers agree that vaccine science is incomplete.

The late Dr. Bernadine Healy, former Director of the National Institutes of Health, said publicly that the question about whether vaccines cause autism “has not been answered.”

Healy was critical of the medical community’s opposition to researching why hundreds of thousands of parents were claiming that their children became neurological damaged after vaccines.

Every thinking person in America should be outraged at the unwillingness of scientists to research what is happening to America’s children.

We need them now.

Watch this interview with former NIH director Dr. Bernardine Healy about why it is disingenuous for public health officials to say that vaccines do not cause autism.

Lyn Redwood, R.N., M.S.N., is co-founder and board member of the Coalition for SafeMinds and the National Autism Association. Ms. Redwood testified before the Government Reform Committee on “Mercury in medicine: Are we taking unnecessary risks?” in 2000, and before a Congressional sub-committee on health in 2003. She has published in the journals Neurotoxicology, Molecular Psychiatry, Medical Hypotheses, Mothering Magazine, and Autism-Aspergers Digest. Ms. Redwood has appeared on “Good Morning America,” the Montel Williams Show, and has been interviewed by U.S News and World Report, Wired Magazine, People and numerous other publications. She is prominently featured in the award-winning book by David Kirby “Evidence of Harm.”
Ms. Redwood served on the Department of Defense Autism Spectrum Disorder Research Program from 2007-2009 and currently serves as a public member of the National Institutes of Health Interagency Autism Coordinating Committee.
She resides outside Atlanta with her husband Tommy, and three children, Hanna, Drew and Will.

Why I Laughed When My Son Flunked His Midterm