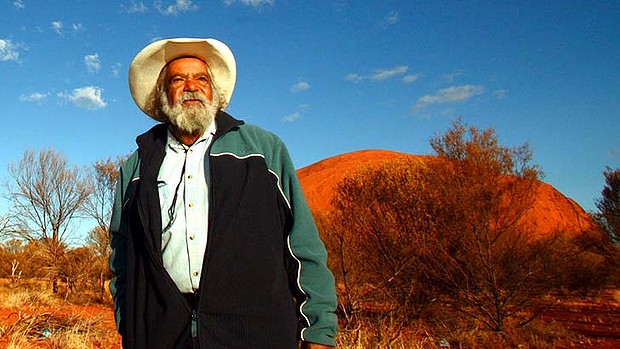 Kanyini is a 2006 Australian documentary film, created by Uncle Bob Randall. His dream was to create a film that supported his Kanyini teachings. He approached Melanie Hoganto produce it with him. She directed, filmed and edited the film with the help of Martin Lee whose filming of Uncle Bob Randall’s interview made the core thread of the story. The film explores the Kanyini philosophy and the life of Bob Randall, Aboriginal elder, songman and storyteller who lived in Mutitjulu, a town beside the world’s greatest monolith, Uluru, in Central Australia. Bob Randall was a ‘Tjilpi’ (special teaching uncle) of the Yankunytjatjara people and a member of the Stolen Generations.[2]

In Kanyini, Bob Randall [cc1933-2015] shares his knowledge of Anangu wisdom, stories of his personal journey and he explores some of the reasons behind the struggles of Aboriginal Australians in modern Australia. Randall explains that when European Australians came to Australia, they broke the four Kanyini Principles that were an integral part of Anangu life. Tjuukurpa was broken when Europeans imposed their law on the Anangu, Ngura was broken when Aboriginal people were forced to move away from their traditional lands, Walytja was broken when the children of Randall’s generation were removed from their family as part of the Stolen Generations and Kurunpa was broken when Aboriginal spirituality was replaced with Christianity. In explaining the loss of his Kurunpa, Randall notes the disconnect between the teachings of the Bible and the actions of the white men who professed them.[3][4][5]

Editor’s Note: Learn more about Uncle Bob by reading his story, told to Kindred’s founder, Kelly Wendorf, and originally published on Kindred in 2012. We are sharing it again in honor of Indigenous People’s Day. Uncle Bob transitioned on May 12, 2015. Uncle Bob’s influence on Kelly’s shepherding of Kindred and orienting our work inside an Indigenous Worldview is credited to Uncle Bob in her books, Belonging, and Flying Lead Change. Uncle Bob is a Yankunytjatjara elder and traditional owner of Uluru (Ayer’s Rock), explains how the connectedness of every living thing to every other living thing is not just an idea but a way of living. This way includes all beings as part of a vast family and calls us to be responsible for this family and care for the land with unconditional love and responsibility.

Kindred is grateful to Uncle Bob’s early guidance on our nonprofit work’s mission and vision for Sharing the New Story of the Human Family. Below are more resources for discovering Indigenous Worldview, Wisdom, and Knowledge on Kindred.

Watch the documentary film of Uncle Bob’s life, Kanyini, below.

Bob Randall is a member of the Stolen Generations and former Indigenous Person of the Year. He is credited with bringing to light the issue of forced removal of Aboriginal children from their families, in 1970. His song, "My Brown Skin Baby They Take Him Away," written at the time, is described as an "anthem" for the Stolen Generations.
He spent some time on Elcho Island and other places in the Northern Territory. At age seven, Bob was removed from his family in the vicinity of Uluru and taken to Alice Springs.[1]
Later he created the first Aboriginal Centre at the University of Wollongong, south of Sydney. He then moved to the Australian National University in Canberra to create a similar Centre called the Jabal Centre at the ANU in Canberra.
He has returned to Central Australia. He is a member of the Luritja Tribe from the Western End of the MacDonnell Ranges.
In 2006, Bob's life became the subject of the documentary Kanyini. View the entire documentary below.
Uncle Bob Randall was born around 1927 in the bush of the Central Desert region of the Northern Territory (NT), Australia. He is a“Tjilpi” (special teaching uncle) of the Yankunytjatjara Nation and one of the listed traditional keepers of the great monolith, Uluru. At about age 7, Bob was taken away from his mother and family under government policy which forcibly removed all half-caste (half-Aboriginal) children from their families.
He was one of thousands of Aboriginal children who were placed in institutions throughout Australia and came to be known as the “Stolen Generation.” Like so many, he grew up alone, away from his family, and never saw his mother again. He was taken to a receiving home for indigenous children in Alice Springs, NT, then later was moved to Croker Island Reservation in Arnhem Land where he, like the other children, was given a new identity and birth date.
No records were kept of the Aboriginal nation, family name, or identity of the Aboriginal children who were stolen. Young Bob was kept in government institutions until he was twenty when he, with new wife and baby, was banished for questioning white authorities. He moved to Darwin and later to Adelaide, South Australia, working, studying, and looking for his family and country of belonging. After many years of heart-wrenching searches, he found his roots and returned to his mother’s country where he lives today at Mutitjulu Community beside Uluru (Ayers Rock).
Throughout his life, Uncle Bob has worked as an educator and leader for equal rights of all living, land rights and responsibility to the environment, Indigenous cultural awareness and preservation, and community development. He established Croker Island Night and several organisations in Darwin including the RRT Pony Club, Boxing Club, Folk Club, the Aboriginal Development Foundation. He worked as a Counsellor through the Methodist Uniting Church and led a country music band that serviced regional Aboriginal communities. Later, Uncle Bob helped establish the Adelaide Community College for Aboriginal people, served as the Director of the Australian Northern Territory Legal Aid Service, performed on stage in “Child of the Night” and “Dream of Reconciliation” and established Aboriginal and Torres Strait Islander Centres at Australian National University, University of Canberra, and University of Wollongong.
In the early 1970s, Uncle Bob earned widespread recognition for his song, “My Brown Skin Baby, They Take ‘Im Away,” which focused national and international attention on the issues of the Stolen Generation. This song exposed the government’s policy of stealing Aboriginal children and opened the door for indigenous story songwriters throughout Australia. It led to the filming of a documentary by the same name that won the Bronze Prize at the Cannes Film Festival and subsequently, the Australian government stopped taking children away from their families. His lifelong efforts to retain Aboriginal culture and restore equal rights for all living were recognised in 1999 when he was named Indigenous Person of the Year. In 2004, Uncle Bob Randall was inducted into the NT Indigenous Music Hall of Fame, recognising the historical significance of his classic story songs, "My Brown Skin Baby, They Take ‘Im Away" and "Red Sun, Black Moon." Uncle Bob has authored four books, including his autobiography, "Songman", and three books for children: "Tracker Tjuginji", "Stories From Country", and "Nyuntu Ninti". He contributed his personal story of being stolen to the anthology, "Stories of Belonging: Finding Where Your True Self Lives", edited by Kelly Wendorf, published in 2009.
In 2006, Uncle Bob co-produced and narrated the award-winning documentary, “Kanyini”. “Kanyini” was voted "best documentary" at the London Australian Film Festival 2007, winner of the “Inside Film Independent Spirit Award”, and winner of the Discovery Channel Best Documentary Award in 2006. Uncle Bob continues to write and teach throughout the world, presenting teachings based on the Anangu (central desert Aboriginal nation) “Kanyini” principles of caring for the environment and each other with unconditional love and responsibility. His tireless dedication calls indigenous people to reclaim their Aboriginal identities and re-gain lives of purpose, so that the relevance of ancient wisdom to modern living is understood. Uncle Bob Randall is a living bridge between cultures and between world nations, creating lines of understanding so that indigenous and non-indigenous people can live and learn together, heal the past through shared experience in the present, sharing a way of being that allows us, once again, to live in oneness and harmony with each other and all things.

In Utero Documentary: An Interview with the Filmmakers, Stephen Gyllenhaal and Kathleen Mann