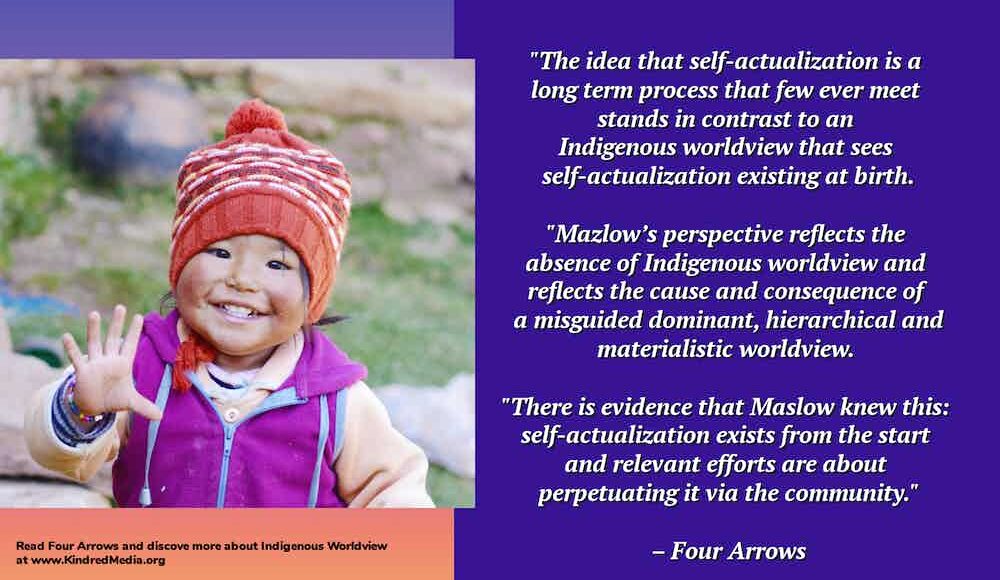 In his book, The Human Quest for Meaning (2012), Paul T. P. Wong opens with a chapter with the title, “Toward a Dual-Systems Model of What Makes Life Worth Living.” The chapter was sent to me recently, questioning whether it offers a model for complementary reflection as relates my new book with Darcia Narvaez, Restoring the Kinship Worldview. In it we describe two life systems that exist in the world, the dominant worldview and the Indigenous Worldview. There are many positive correlations between what Paul Wong writes in his chapter titled “Toward a Dual-Systems Model of What Makes Life Worth Living” and the “Indigenous worldview.” For example, he writes, “In reality, positives and negatives often co-exist. It is rare, if not impossible, to have purely positive or negative conditions” (p.6).

In our book, Restoring the Kinship Worldview, we refer to 40 contrasting precepts between the dominant and the Indigenous (Kinship) worldviews, emphasizing a non-binary approach to studying them as a continuum, seeking complementarity when possible. Wong supports this non-binary approach, recognizing and understanding both “positive and negative” aspects as important as complementary factors as relate to coming to healthy decisions in life.. Rather than antagonistic opposites struggling for dominance (Webb, 2013), under the Indigenous worldview they are understood as being potential “interdependent parts of a harmonious whole” (IBID). It is a spiritual understanding that the binary is somehow interconnected. There is something, at least, to learn from it. The effort to see the teaching of a polarizing situation, even if one “side” is significantly harmful, is intrinsic to a true kinship worldview that defines spirituality as the giving of significance to others, with others being part of an interconnected system or of a sense of oneness with all.

These ideas are essentially compatible with Indigenous thinking (nature-based thinking as the worldview does not belong to any group but emerged from those who observed and lived according to the laws of Nature). However, they are taught in stories and supported in ceremonies as a way of life that maintains the actualized self. It does not seek to find what one wants as the person under IW (Indigenous World) already knows. It does not seek to overcome anxieties as the goals are always to align with relationships with all. It does not try to make sense of life’s paradoxes but instead embraces them in forward-moving ways or accepts them as mysterious unknowing in ways that also move forward in behalf of oneness.

Without bringing worldview, which is a foundational understanding of human relationship to Nature and Super-Nature, recognizing the yin and yang in life as complementary is insufficient to allow non-complementary thinking to emerge. it is more important to note that the uninvestigated dominant worldview orientation is the cause of such a world. They do not describe most human history where most cultures practiced egalitarian ways of being, saw justice in restorative terms, and dealt with the four-legged swimmers, crawlers, flyers, waters, trees, and mountains as relationships, not resources. Gift economies prevented concerns about “all individuals getting what they want in life.”

Thus, the questions posed that seem relevant to Wong’s dual model: What does life demand of me? What should I do with my life? What really matters in life?  are not necessary when a life is self-actualized from birth and nurtured via a loving community of humans and non-human entities and spirits. People in Indigenous communities who can still practice the Indigenous worldview and the unique place-based knowledge under it were not at risk of becoming individuals at risk for experiencing life as being on a ship without a rudder (as Maslow witnessed during this time with the Blackfoot)

Another way that Wong’s model may see through the lens of the dominant worldview is what he conceives of as the human story. He writes that it is one of tenacious and heroic struggles; otherwise, the human race would not have survived for so long. Recent archeological and anthropological scholarship, such as that in Graeber and Wengrow’s book, The Dawn of Everything, tells a different story. it is about choosing egalitarian forms of government. it sees generosity as the highest form of courage. It demonstrates joyful curiosity and sees sacredness and spirit in everything. I am not engaging in dangerous romantic notions about Indigenous history here. See the 40 precepts listed in the worldview chart.

Wong is correct when he emphasizes the importance of self-knowledge and social purpose in life. If, however, he brought more of the foundational Indigenous worldview to bear on his excellent goals to help people, including a more animistic understanding of the world, his contribution to the field of psychology would be far more significant. He says we need to recognize anxiety as an existential given and emphasize the human capacity for meaning transformation. Under the Indigenous worldview, surviving and thriving is not anxiety-producing. It recognizes oneness in our multi-faceted, complex, mysterious, and diversity-focused world that is full of generosity and gratitude. Worldview is the foundational understanding of our relationship to Nature and Supernature.

If the world is about oneness, a worldview must reflect this to be a “kinship worldview.” Wong writes the central message of the dual-systems model (recognizes that) too much emphasis on either approach or avoidance can be maladaptive. He tends to ignore the idea that today’s dominant, colonial worldview is maladaptive. To restore the Kinship Worldview, his complementary joining of positive and negative can truly achieve a life worth living only with the realization that life in our cosmos is about dynamic change and diversity in a world of vitally interconnected spiritual energies spirit-embodied beings. It is not about only a purposeful life and self-regulation to preserve and expand oneself, but instead recognizing the need for reciprocity, respect, and responsibility for all our Relations.

This chart is not intended as a rigid binary, but a true dichotomy best viewed as a continuum. It is meant to encourage seeking complementarity and dialogue. Absolutism is discouraged with the realization we are all participating in DW precepts to some degree. The chart assumes that all diverse cultures, religions, and philosophies can be grouped under one of the two worldviews. “Indigenous Worldview” does not belong to a race or group of people, but Indigenous cultures who still hold on to their traditional place-based knowledge are the wisdom keepers of this original Nature-based worldview. All people are indigenous to Earth and have the right and the responsibility to practice and teach the IW precepts. All have the responsibility to support Indigenous sovereignty, dignity, and use of traditional lands.

For non-Indians who are concerned about misappropriation, see the peer reviewed article,

“The Indigenization Controversy: For Whom By Whom.”

Kindred Worldview Chart in black and white for printing in PDF format: Download

Kindred Worldview Chart in black and white for printing in PNG format: Download

Wahinkpe Topa (Four Arrows) is a professor at Fielding Graduate University. Former Director of Education at Oglala Lakota College, he is a made-relative of the Oglala and a Sun Dancer. Selected by AERO for their text Turning Points as one of 27 "Visionaries in Education" and recipient of a Martin Springer Institute for Holocaust Studies "Moral Courage Award" for his activism, he is the author of more than 20 books, praised by such notables as Noam Chomsky, Vandana Shiva, Henry Giroux, Darcia Narvaez, Greg Cajete, Sam Keen, Thom Hartmann, and many others. His books, chapters, articles and videos on Indigenous Worldview and its applications for sustainability can be accessed at fourarrowsbooks.com. He lives with his artist/photographer wife in a remote section of Mexico on the Costalegre. There is also a book on his work entitled Fearless Engagement of Four Arrows by R. Michael Fisher (Peter Lang, 2019).

An Indigenous Worldview Can Preserve Our Existence, A New Video

Finding A Bridge To Indigenous Wisdom And Worldview: An Interview With Kelly Wendorf

Our “Science-Fictiony” Worldview Lens: Do We Ever Know What…