How A Weight Loss Clinic “Mistake” And A Shipboard Explosion Sparked The Trauma-Informed Movement In America, And Worldwide 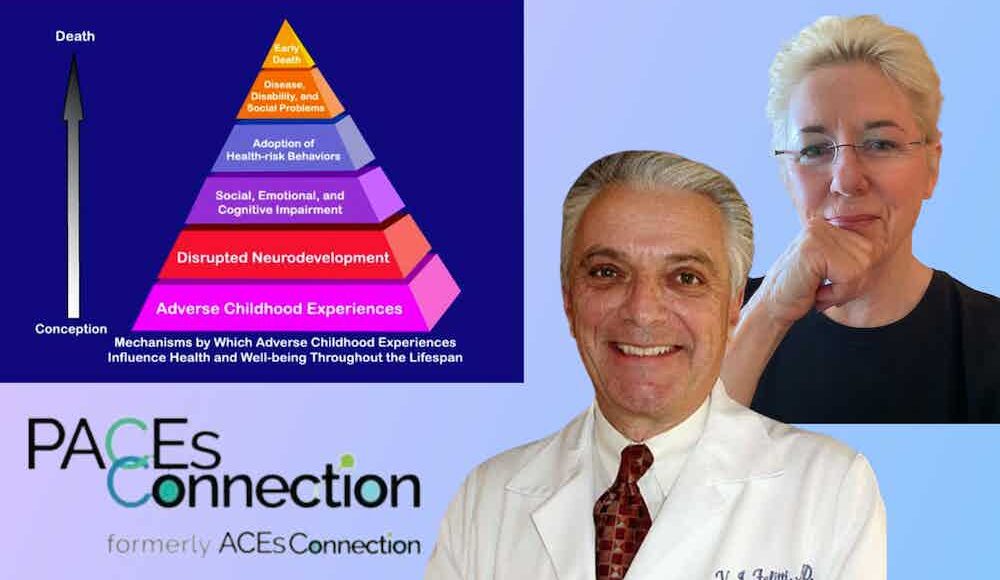 What if I told you you’re probably reading this post in this blog because of a mistake in a weight loss clinic in 1985, and a horrific shipboard explosion in the Antarctic ocean in 1998?

Or that you might not even know about the CDC-Kaiser Permanente Adverse Childhood Experiences Study (ACE Study) much less the study on positive childhood experiences (PCEs), were it not for that mistake and that explosion?

The doctor’s mistake-turned-revelation and a relentless reporter’s outrage and commitment to “get the science to everybody” can also be credited, at least in part, for sparking:

Dr. Vincent Felitti and Dr. Robert Anda, co-principle investigator of the ACE Study, first published their findings in 1998. Over the next 20 years, more than 70 publications followed. The story about the mistaken question that led to the ACE Study can be found in this article: “The Adverse Childhood Experiences Study — the largest, most important public health study you never heard of — began in an obesity clinic”.

“I misspoke,” he recalls, probably out of discomfort in asking about when she became sexually active – although physicians are given plenty of training in examining body parts without hesitation, they’re given little support in talking about what patients do with some of those body parts. “Instead of asking, “How old were you when you were first sexually active,” I asked, “How much did you weigh when you were first sexually active?’ The patient, a woman, answered, ‘Forty pounds.’”

He didn’t understand what he was hearing. He misspoke the question again. She gave the same answer, burst into tears and added, “It was when I was four years old, with my father.”

Two months after the first ACE Study was published, Jane Stevens, a science journalist, boarded the Aurora Australis, a research icebreaker, in Hobart, Australia, for a seven-week research expedition into the Antarctic winter sea ice. Her mission: Chronicle the expedition with words, photos, and video for the Discovery Channel’s website. Several days into the voyage, in the middle of the night, the ship’s main engine exploded to leave the ship and its expeditioners and crew stranded hundreds of miles from safe harbor with no hope of rescue. In Mayday at the Bottom of the World, Stevens tells the story of how the trauma of the explosion awakened and coalesced memories of her childhood abuse—including sexual and verbal abuse. And how learning about the ACE Study in 2004 changed her life trajectory.

Her first reaction to the ACE Study: Somebody’s making this up.

Stevens’ first reaction to the ACES Study was, somebody’s making this up. Somebody’s making up that adversity in childhood leads to the adult onset of most chronic diseases and mental illnesses, and is at the root of violent behavior, whether by a perpetrator or a victim.

Somebody’s making up the finding that most people have one or more of the 10 adverse childhood experiences that were measured in the study. And that if you have four “ACEs,” your likelihood of becoming an alcoholic increases 700% compared with people who have an “ACE score” of zero. And that your likelihood of attempting suicide increases 1,200%. And that your risk of a heart attack doubles and of lung cancer triples.

Felitti and Stevens first met in 2004 when Stevens interviewed him and Anda for an article about the link between ACEs and obesity, which was published in the Sacramento Bee’s Sunday Forum section in 2005. (Several years ago, the Bee deleted all articles written by freelance writers, so the only link that exists is on the NoSpank site: https://nospank.net/stevens.htm.)

Over the next several years, the loose connections between Felitti and Stevens began tightening. Felitti, Anda and their fellow researchers released one study after another. The co-authors made presentations about their work to anyone who would listen, especially to the medical community to which they belonged, but weren’t getting much traction. Stevens moved on through the journalism world, ending up as an online news executive and occasionally writing an article about the latest ACE Study paper.

“But there was one piece of research that compelled me to leave a solid career as an online news executive. It was the 2009 finding that people with six or more of the 10 ACEs in the original study — including abuse and neglect — are at a higher risk of dying 20 years prematurely than people with zero ACEs,” says Stevens.

January 2012, Stevens launched ACEs Connection, which in March 2021 became PACEs Connection, to add the latest research about “positive” childhood experiences. It comprised ACEsTooHigh.com, a news site for the general public, and the social network ACEsConnection.com (now PACEsConnection.com), for people who were actively engaged in integrating ACEs science into their personal, family, organizational and community lives.

As she went to sleep the night after the launch, a grim thought occurred: What if nobody joins ACEsConnection? She woke up the next morning to see 200 new members. Felitti had emailed everyone in his contact list about the site. A year later, there were 1,000 members, and membership has been galloping along ever since to reach 57,730 today.

It’s difficult to pinpoint exactly what drove the explosion of interest in ACEs science (or PACEs science, which we define as epidemiology, neurobiology, health consequences, epigenetic or historical trauma, and resilience research of positive and adverse childhood experiences) because the increase in the number of articles, research publications and projects to integrate ACEs science began accelerating in 2012 and hasn’t stopped. But it was definitely the combination of:

“It has been of extraordinary importance, the worldwide effect she has had.”

Felitti officially retired from Kaiser Permanente in 2001. He was still involved in the ACE Study until 2018, when it was ended; he stayed active in an obesity reduction program at Kaiser for several years, and, until COVID hit, traveled the world to consult and do presentations about ACEs science. He recently moved to a retirement community in California, and remains active in the PACEs movement. Anda left the CDC to found ACE Interface with Laura Porter, an early pioneer who introduced the ACE Study to a network of more than 40 communities in Washington State. The two have done hundreds of train-the-trainer workshops about what they call NEAR science—neurobiology, epigenetics, adverse childhood experiences, and resilience—in cities and states around the country.

“It is not surprising to me that PACEs Connection has created a worldwide movement because Jane Stevens, in addition to being a really superb writer, knew how to present this information in a way that would disseminate it widely,” says Felitti. “It has been of extraordinary importance, the worldwide effect she has had.”

“…home for the growing community of survivors, trauma professionals…”

Both Stevens and Felitti are glad there is a home for the growing community of survivors, trauma professionals, parents trying to stop cycles of family addiction and abuse, pediatricians, mental health workers, educators, nurses, judges and others looking for resources to solve the most intractable problems in their communities.

When asked about the impact of PACEs Connection on the spread of information about the connection between childhood trauma and adult disease, and why people should support PACEs Connection, Felitti says: “They’ve built a database with a worldwide membership, mainly in the US, but clearly worldwide, but even more important, it is the transmission of that information about positive and adverse childhood experiences (that is important).

“PACEs Connection has pages that have been seen by millions of viewers who are not regular members of PACEs Connection,” Felitti continues. “Viewers are being sent these pages by friends, colleagues. The implication is truly worldwide coverage.”

“I can’t imagine a better way of honoring Dr. Felitti than to make sure his work is shared,” says Stevens.

Supporting PACEs Connection helps people from all walks of life with the resources and information that they can use. It helps survivors experience the freedom that comes from learning they are not alone, that they are not at fault for how they coped with their childhood adversity. They didn’t cause or deserve the abuse, and together we can heal from it.

“I hope all who have been touched by the work that Dr. Felitti and I have done to use PACEs science to prevent and heal trauma will remember PACEs Connection on Giving Tuesday. I hope you will join us and make a generous donation to continue our work to create a world where all children have the opportunity to thrive.”

Watch Vincent Felitti, MD, present the Origins of the ACES Study in this video here.

Beyond Trauma-Informed: A Video Presentation by Darcia Narvaez on our Evolved Nest

Carey Smith Sipp is the Director for Strategic Partnerships for PACES, Positive and Adverse Childhood Experiences. She is a science, brain, health, and parenting enthusiast who learned about the ACE Study almost 20 years ago. As the Southeastern community facilitator for PACEs Connection, Carey uses four decades of experience as an award-winning writer, marketer, fundraiser, and campaigner to help PACEs initiatives in 11 states create communities on PACEsConnection.com, find resources, and leverage opportunities to take trauma-informed practices into new and existing sectors. She also supports interest-based groups, including PACEs in the Faith-Based Community and the Trauma Informed Healthcare Education and Research Group. As an PACEs Connection lead in communications and social media, she’s raising awareness of PACEs science across all sectors: government to healthcare; education to juvenile justice; airlines to zoos. Carey’s work has also included service on boards of directors for several non-profits supporting leadership development, nutrition, and underserved youth, and volunteering at residential treatment centers for mothers recovering from alcohol and drug abuse. Carey graduated with an MS in Communications (Journalism) from the University of Tennessee at Knoxville.

PACEs story: I grew up in addiction and abuse. When I had children, I vowed they would have a saner, calmer childhood than my own, so I joined a recovery group for family and friends of alcoholics, immersed myself in parenting education, and quit drinking, just in case. Somehow I knew children’s brains are wired for peace and calm or for agitation and addiction. In 1996, when I started working on a book about breaking cycles of addiction and abuse, I called the National Association for Children of Alcoholics for resources. In 2000, one of the pieces of information they sent was the ACE Study. I read it and wept. My score explained my health issues; my prognosis was grim. Instinctively, I delved deeper into recovery, spirituality, parenting, exercise, nutrition. A few years later, hope came when advances in brain science showed the brain has plasticity, the body wants to heal. In 2008 I started contributing articles about PACEs science to a medical information website. Five years later I met Jane Stevens, and five years after that, I was hired at PACEs Connection. My work comes full circle as I write about how PACEs lead to addiction and addiction leads to PACEs, and that PACEs science and trauma-informed communities hold solutions to preventing multi-generational cycles of addiction and abuse.

How Attachment-Aware Scotland Became ACEs Aware, A Video With Suzanne…

The Origins Of ACES: Vincent Felitti, MD, Presents His Study’s…