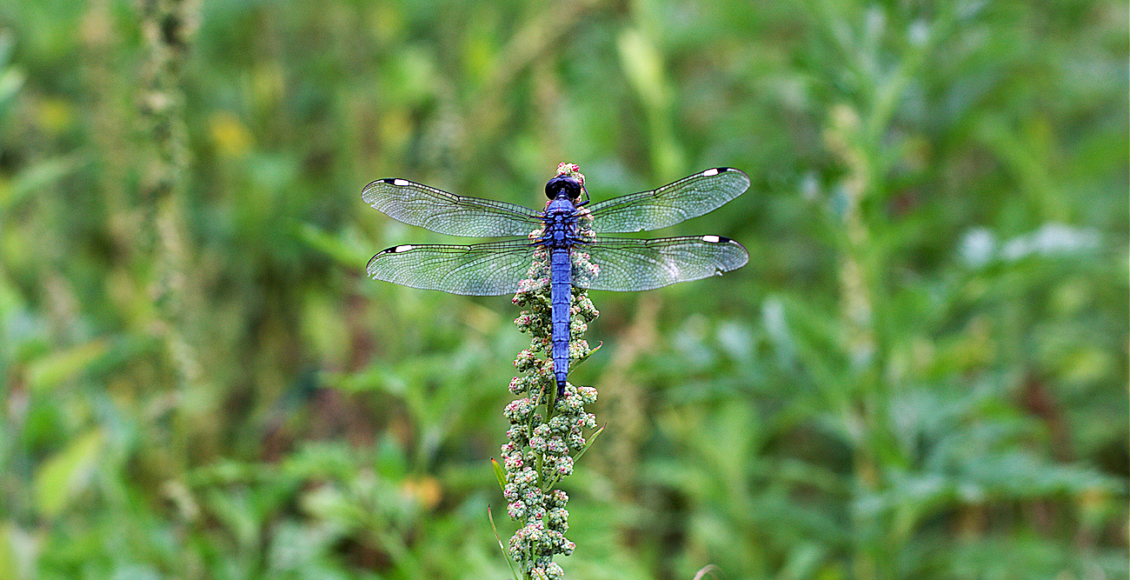 Below is the letter from the editor of Kindred’s August 2022 issue. Read the issue here.

Noting the red swaths moving across the weather map toward Virginia last week, I interrupted the to-do list running in my head to tend this year’s pollinator patch and carefully water the roots of blooming flowers. The news reports of record-breaking heat waves and fires in Europe and Texas stayed in my mind, along with one reporter’s crack that the “Brits are now re-considering their disdain for iced tea.” Joking while the planet burns, this is what our traumatized atypical species does now for elusive, momentary relief.

A light tickling on my hand holding the hose brought me back to my body and to a large, blue dragonfly who rolled his bulbous eyes up toward my face but stayed perched on my hand, enjoying the back spray of the hose. I studied my gardening collaborator and remembered dragonflies spend most of their lives as aquatic creatures, living underwater in a larva stage for years before skipping over a pupa stage, moving to the edge of their watery home, and hugging the shore where they learn to breath air, grow six legs, sprout winged sheaths, and push out of their old bodies skyward. They live as air-borne creatures for only a few months.

What drove the dragonfly’s aquatic form toward the shore? Did the tiny being fight the transformation? Curse its bad luck to be driven out of its only known home by forces outside of its control? Or was there a surrender to the innate intelligence of its beingness to the mystery ahead?

The visit from the blue dragonfly meant it was time to listen. As a lifelong gardener, a moment came decades ago, and then many moments, when I realized my practices of “cultivating the earth” were, from a different worldview, the earth cultivating me, my consciousness, relational capacity, my awareness of being loved deeply. Despite my conceptual brain’s attempts to regulate tyrannical to-do lists with forced breathing practices, from this primal worldview, I had always been breathed into existence effortlessly, graciously, and generously.

Over decades, my practices became focused on the spaces between thoughts, breaths, stories, the something else, an expansive beyondness. Now, when I crawl to the edge of my latest no-longer-sustainable bog state, admitting this isn’t working anymore, I look around for who else is hugging the muddy embankments of the inbetween spaces. Many of these encounters are chronicled here at Kindred with trance-breakers, new cycle makers, and wayfinders.

What transformative processes could humans ignite if we bowed to nature’s intelligence, focused on the space between our stories, and surrendered to a worldview that could lift us out of our individual and collective bogs? What if we began this process before setting out with our best intentions of saving the world?

Worldviews create worlds. What creates our worldview? In this issue of Kindred we hear from human consciousness field researcher, Marilyn Schlitz, who shares with us her decades of hard science research into worldview literacy, considered the most important skill of our time by many philosophers, scientists, and changemakers. Schlitz shares the known practices for building and shifting our worldview awareness. Worldview literacy can be learned.

There are only two worldviews. We also hear from Four Arrows and Darcia Narvaez, who take us deeper into the territory of worldview with their new book, Restoring the Kinship Worldview. As Four Arrows’ decades of cognitive anthropology scholarship shows, there are only two worldviews for us to experience: the disconnected, Dominant Worldview, and the connected, Kinship or Indigenous worldview.

“To shift from the dominant worldview to the original Indigenous worldview takes some decolonizing of the mind. Our minds have been suckled on the milk of civilization’s domination and coercion of life, with industrialization and capitalism increasing disconnection and alienation from earth consciousness. This book plants the seeds for decolonizing your mind,” writes Four Arrows in the book’s introduction. You can now read the introduction to the new book and listen to the author’s new video presentation on the book here. You can download Four Arrows’ Worldview Chart, illustrating 40 precepts of the Dominant and Indigenous Worldviews here.

Why is worldview literacy a crucial skill to develop before setting out to become a changemaker? Because Traditional Hamster Wheel Activism – running ourselves ragged, kidding ourselves with impact statements and studies based on cultural bias, and stress-relieving, reactionary fist waving – is designed at its core to reproduce trauma and deplete our precious energies. Yes, we feel like we’re really getting somewhere because we’re moving and shaking, but a few trips outside of the Dominant Worldview and its Cycle of Competitive Detachment, will show us the truth of our efforts: we’re going nowhere fast. Without consciously shifting our worldview, we will continually create the same unsustainable world.

Where to begin? Our Dominant Worldview’s values are responsible for creating baselines for health and wellness in the United States that have resulted in the sickest population of any developed nation. Our Evolved Nest components are our evolutionary baselines for wellbeing and whole human thriving. From a consciously cultivated Kinship Worldview, and through the grounded tenets of Kindred Activism, we are now ready to break cycles, make new cycles, and find imaginative ways to create a Wisdom-based, Wellness-informed Society. This is Kindred’s vision and mission and has been for over a quarter century.

What can we see with new eyes? It is easier to see the inspirational changes taking place in our culture through the lens of a worldview that values relationship, divergent thinking, centering childhood in social justice, and creating parallel structures not dependent upon status quo institutions.

The good news is, it’s already happening. Integrating and illustrating in real time our themes of worldview, wayfinding, and abandoning the hamster wheel this month is Kindred’s Meet the Wayfinder Oral Hisory Series, launched in celebration of World Breastfeeding Week, National Breastfeeding Month, Indigenous Milk Medicine Week, and Black Breastfeeding Week. In the Meet the Wayfinder series you will hear from nine wayfinders who broke barriers to breastfeeding advocacy in America’s workplaces, hospitals, academia, formula-influenced bio-medical fields, media, and created awareness through the performance arts, establishment of parallel structures that meet BIPOC community needs, and more. These are stories of individuals who followed an innate call through to the end.

What did the dragonfly say? Transformative change is happening all around us, if we have the eyes to see and ears to hear. We are a storytelling species. Not leaving the bog of our Old Story is no longer an option. Our New Story will be written in collaboration with all of our kin, all of life in mind. It is time to move toward the shorelines where many are gathering. Leave the bog. Get ready to fly. We got this.

Top Ten Insights from Above

On a Mother (of a) Quest for 20 years as an award-winning journalist, activist and nonprofit visionary, Lisa Reagan explores the space between our unsustainable, industrial Old Story and the emerging New Story of what is possible for Cultural Creative families – who are listening to their children, while envisioning and exploring the way forward. Lisa is a co-founder of the nonprofit Kindred World and the executive editor of Kindred.