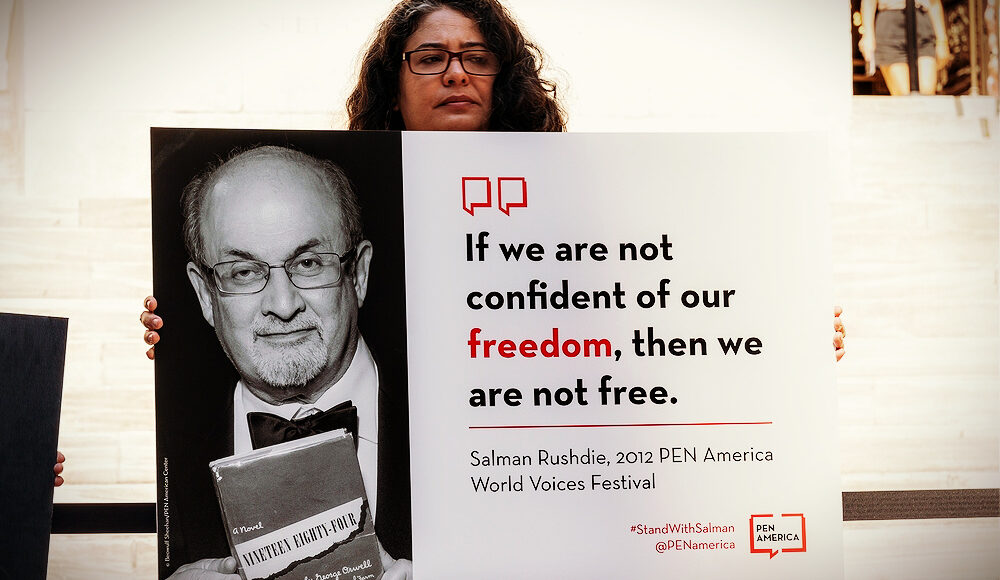 Suppose one remains thinking via our dominant, Western-based worldview, as does Bari Weiss in the above-titled piece. In that case, one might miss some problems and inconsistencies woven into an otherwise proper position on supporting free speech. On the surface, Bari seems to agree with another Jewish intellect, Noam Chomsky. He states that we should never employ the tools of oppressors to silence those with whom we do not agree, no matter how much we may disagree with their views. Yet Bari has a list of university professors she claims are anti-semitic and has recommended Jewish people withdraw their funds from universities with groups that support BDS and are critical of Israeli policy in Palestine. Hmmm. I wonder what Salmon Rushdie would think about being used by Bari to support “Western values?” And if she hints that Rushdie, by making fun of or scorning some religious beliefs of Muslims in his novel, Satanic Verses, would support Bari’s position anti-Palestine position, read his conversation with Edward Said on “Palestinian Identity.” It is not likely something she would refer to in her Wall Street Journal editorials.

Bari writes, “the difference between civilization and barbarism is that civilization responds to words with words.” Of course, she refers to pre-contact Indigenous cultures when she refers to “barbarism.” I challenge her assertion with an opening quote in my new book entitled Restoring the Kinship Worldview: Indigenous Voices Introduce 28 Precepts for Rebalancing Life on Planet Earth, co-authored with Darcia Narvaez. The quote is by Paul Shepard.

When we grasp fully that the best expressions of our humanity were not invented by civilization but by cultures that preceded it, that the natural world is not only a set of constraints, but of contexts within which we can help us realize our dreams, we will be on the way to a long overdue reconciliation between opposites which are of our own making.”

Are words violence? Of course not. Just like “violence is violence,” “words are words.” Her very title is a play on words, revealing not their violence but their potential for deceptive influence. Under our dominant worldview, we live in a post-truth world where, as Kipling once said, “words are our most potent drug.” When Europeans first lied to steal Lakota lands, the Lakota did healing ceremonies for the liars, believing they had a mental illness that did not allow them to see reality. If there is any message in Satanic Verses, it would be a spiritual understanding that words are sacred vibrations.

Words not being violence, however, is quite different from words inciting violence. Words can harm people, especially during times of stress when people become hypersuggestible to the mandates of perceived authority figures. According to the American Academy of Orthopedic Surgeons, in their text Care and Transportation of the Sick and Injured, write: “words spoken at the scene of a medical emergency when people are in fright, even when spoken in jest, can become fixed in the patient’s mind and cause untold harm.” Yet even this is only a product of an authoritarian, hierarchal, human-centered worldview.

All of this is not to say we must ban “hate speech.” We have seen such actions backfire over and over. It is to say we must stop using words deceptively. We must stop our “us versus them” disrespect for interconnectedness and interdependence with all life on earth.

Rushdie ‘s novels assumed that diverse communities and cultures share some degree of common moral ground, the basis of which dialogue with apparent opposites can seek complementarity. It does not erase the fact that we can evoke hostility with words under the fear-based, absolutist “either-or” dominant worldview. Rushdie’s novels address the politics of racism. They question the historical and political past and present. Weiss could do this well herself if she realized that without awareness of the underlying dominant worldview, she would still be treading water. The task before us is metacognitive worldview reflection. We must look at our two fundamental worldviews, the dominant one now ruling the world and the Indigenous one still being ignored or attacked. Only then can well-written essays help us all life systems back into a harmonious balance”one where once again, we understand words as sacred vibrations that demand honesty.

Kindred Worldview Chart in black and white for printing in PDF format: Download

Kindred Worldview Chart in black and white for printing in PNG format: Download

Read more about the worldview chart by Four Arrows here.

Wahinkpe Topa (Four Arrows) is a professor at Fielding Graduate University. Former Director of Education at Oglala Lakota College, he is a made-relative of the Oglala and a Sun Dancer. Selected by AERO for their text Turning Points as one of 27 "Visionaries in Education" and recipient of a Martin Springer Institute for Holocaust Studies "Moral Courage Award" for his activism, he is the author of more than 20 books, praised by such notables as Noam Chomsky, Vandana Shiva, Henry Giroux, Darcia Narvaez, Greg Cajete, Sam Keen, Thom Hartmann, and many others. His books, chapters, articles and videos on Indigenous Worldview and its applications for sustainability can be accessed at fourarrowsbooks.com. He lives with his artist/photographer wife in a remote section of Mexico on the Costalegre. There is also a book on his work entitled Fearless Engagement of Four Arrows by R. Michael Fisher (Peter Lang, 2019).

Gabor Maté on The Myth of Normal: Trauma, Illness & Healing in a Toxic Culture

Revitalizing Indigenous Traditions In America’s Cradle of Colonization: An…

Our “Science-Fictiony” Worldview Lens: Do We Ever Know What…