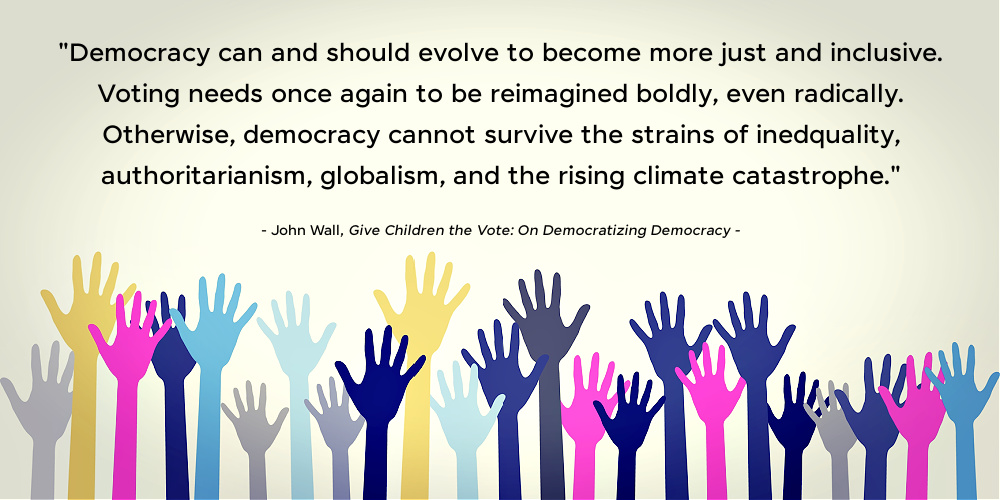 In this interview, we discover the global movement to give children the vote from John Wall. John is the director of the Childism Institute at Rutgers University and the author of the book Give Children the Vote: On Democratizing Democracy.  Before you dismiss this idea, John asks us to remember the violent historical protests and mindsets against giving women and minorities the vote.

As John shares, these same patriarchal impulses are alive and well in the adultist foundation of democracy. In this interview, John will walk us through democracy’s need for conscious evolution and integration of diversity in order to reflect people’s lived experiences. Finally, we consider the worldview issue and how, a kinshp or Indigenous worldview honors children’s sovereignty and prepares them from birth to participate in all levels of family, community, and social governance. In contrast, our Dominant Worldview separates childhood from adulthood, disallowing children the opportunities and orientation needed to form democratic societies.

The need to bring a third of the world’s population into the democratic process, to decolonize and democratize democracy, is, as John argues, greater than ever. Enjoy this interview and check out resources from Kindred’s partner, the Childism Institute, below.

Listen to the Interview

WHAT IS CHILDISM? (From the Childism Institute)

Childism aims to empower the third of humanity who are children. It is analogous to other critical terms like feminism, in that it responds to young people’s marginalized experiences by transforming scholarly, social, and political norms and structures.

Beyond including children and young people as social agents, childism also challenges the historically ingrained adult-centered assumptions that underlie children’s systemic exclusion in the first place. In a similar way to feminism, antiracism, womanism, postgenderism, postcolonialism, decolonialism, environmentalism, transhumanism, and the like, it provides a needed critical lens for deconstructing adultism and patriarchalism and reconstructing age-inclusive practices, advocacy, and thinking.

The concept of childism initially grew out of the interdisciplinary field of childhood studies, but has also crossed over into diverse humanities and social science disciplines. The term itself has been in use since around 2006 (Wall 2006, 2019). As meant here, it differs from earlier uses of the term in literary theory (Hunt 1991) and later uses in psychoanalysis (Young-Bruehl 2011). The difference is that childism in the childhood studies sense views children positively as empowered social beings.

In the humanities, childism in this sense has informed fresh approaches to ethical theory and practice (Rubio 2010, Wall 2010), human rights and social justice (Elkins 2013, Ott 2019), poststructuralist literary studies (Wadsworth 2017), and biblical studies (Parker 2017). In the social sciences, it has been applied in girlhood studies (Mandrona 2016), education (Franck 2017, Warming 2011a), children’s political citizenship (Sundhall 2017, Wall 2008, 2014, 2016), and climate studies (Biswas 2019). In these and other ways, researchers have started to examine children’s lived experiences, not only as important in their own right, but also as raising fundamental questions about larger social systems.

On a Mother (of a) Quest for 20 years as an award-winning journalist, activist and nonprofit visionary, Lisa Reagan explores the space between our unsustainable, industrial Old Story and the emerging New Story of what is possible for Cultural Creative families – who are listening to their children, while envisioning and exploring the way forward. Lisa is a co-founder of the nonprofit Kindred World and the executive editor of Kindred.

The Men Of ROBE: Standing At The Intersection Of Fatherhood, Infant Mortality,…

Meet The Men of Robe: Standing At the Intersection of Fatherhood, Infant Mortality,…

Childism and the Vote